Give today Give monthly
9

Helping Transform the Life of a Young Man with Asperger's

Asperger’s Syndrome: How One Young Man Developed His Independence 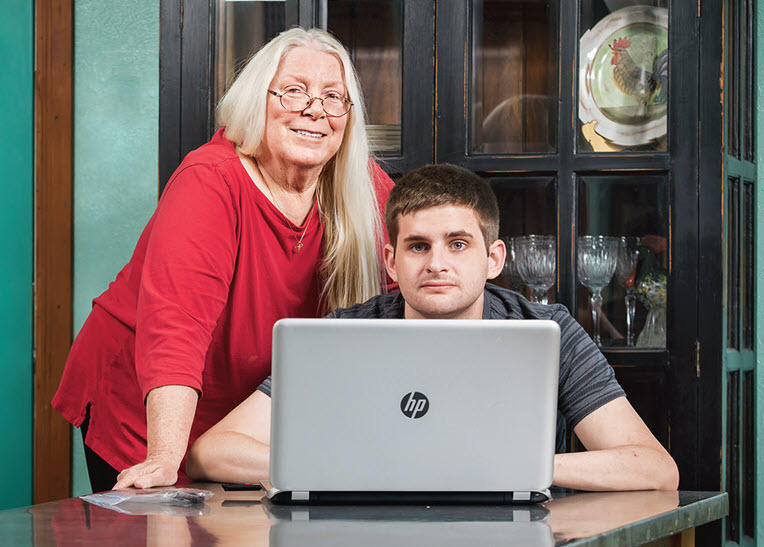 Andrew Chilton wasn’t joking. At that moment, the high school junior wanted his personal care attendant, Christy Chachere, out of his life forever. Gone. He didn’t want her telling him he didn’t need help using the computer, that he could write his own term papers. Enough already.

“You’re fired!” He said it again for extra emphasis.

Christy didn’t flinch. She needed this job. Hurricane Katrina had wrecked her savings along with her house. But the retired PE teacher wasn’t daunted. “I’m a tough nut,” she says today. “You know, I’ve taught middle schoolers.”

And Andrew’s outburst? It was music to her ears. Progress. She’d gotten through to him.

When Andrew was diagnosed with Asperger’s syndrome, at age eight, people told his mom, Cindy, to “get him on the list” for an attendant to provide after-school care. Someone to drive him places and see that he was safe. In New Orleans, Louisiana, the wait can be years; the need far outstrips the supply. Cindy chose a program through Volunteers of America Southeast Louisiana, a national faith-based organization.

Even so, it was eight years before they were matched with Christy. In the meantime, Andrew’s family did their best to shelter him from life’s hardships. “I worried about him,” Cindy says. “I tended to hover a lot.”

There was a lot to worry about. Doctors and school officials predicted that Andrew might not even graduate high school. Other questions loomed. Would he ever have a job? Live independently? Cindy would do anything for her son.

Christy saw the problem right away. “Andrew wouldn’t take a step without his mother’s permission,” she remembers. “You have to let him fail,” she told the family. “It’s the only way he’s going to learn. To be able to do things on his own.”

No longer would Cindy write Andrew’s papers for him. His younger brother wouldn’t help him navigate the computer. Christy wouldn’t be helping him with homework either. It was a little scary to step back. But everyone was on board. Everyone but Andrew.

He complained. Loudly at times. But then things began to change. Andrew would come home from school, get a snack and start on his homework. He saw that Christy really was there for him. She wouldn’t do his papers for him. But she showed him how to get organized. And she coached him on how to deal with frustration and difficulties. To break work down into small pieces, so as not to be overwhelmed. How best to ask his teachers for help.

“She understood autism,” Andrew says. “It turned out she was really nice.”

Best of all, once his work was done, Christy offered freedom. She’d take him to the bookstore or to a store where he could buy Pokémon cards. To the movies. Or out to eat his favorite food, sushi.

One step at a time, Andrew gained independence. He graduated high school and entered community college. And he stopped trying to fire Christy.

She’s been with Andrew six years now. Five days a week, six hours a day. When they arrive at the college, Andrew springs from the car and strides purposefully across the campus, while Christy runs to keep up. “I think I’ve created a monster,” she jokes.

Last spring Andrew moved into his own apartment, above the family’s garage. He’s working toward an associate’s degree in video game design. This past summer, he was a counselor at a sleepaway camp for kids with autism. He’s studying to get his learner’s permit to drive. At 25, he says life has never been better: “I’ve been blessed.”

Andrew and Christy. They’ve done it together. No doubt about it. They’ve been doubly blessed.